I have always heard authors say that some characters have a mind of their own.  That is what I am finding with the Monsters.  They are fun to draw and fun to write, and they seem to be completely out of my control.  As you will see they evolve into something entirely different than my original concept.  They go from being tough evil warriors to being more like Laurel and Hardy.
I am not going to reveal much about them today.  They are central to a story line that lasts for several strips and I do not want to give any spoilers.
I have not named them.  At some point I am thinking of having a contest and letting the readers name them.  (First I have to get more readers, so keep spreading the word). 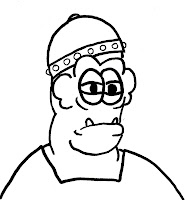 Orc:
Orc is the leader of the two.  He is no where near as evil and horrible as he thinks he is. 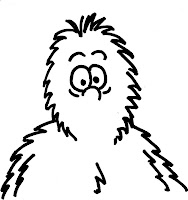 hey - Ed can you ask Orc where he went to school? I think I remeber him from 4th grade in Golbert oklahoma !
and ask him if he is merryed my sister in law is still looking for a good , uhmm I mean a Evil monster to settle down with!